How Does Laser Tattoo Removal Work?

Most patients like you with unwanted tattoos are interested in the idea of laser tattoo removal, but are not sure how it works. Before we get too far into the science of tattoo removal, it’s important to understand that it is a very specific and intentional process—much like getting a tattoo in the first place. Lasers designed for tattoo removal use short but extremely powerful bursts of light that specifically target the ink particles of the tattoo without harming (too much) the surrounding skin. This process of preferential absorption into the tattoo ink is known in the laser world as “selective photothermolysis”.

So, how does the process work? The answer lies within the tattoo – a lot of implanted ink.  As you might remember when you got your tattoo, your artist used a needle to “push” the ink into the deeper layer of your skin, known as your dermis. These ink particles were likely layered on top of one another to create the image of your tattoo. Normally, your immune system works to remove foreign things like viruses and bacteria. It tries hard to do the same with the ink particles in your tattoo, but they are just too large, so your tattoo remains visible on your skin permanently.

Tattoo removal lasers don’t actually remove the tattoo—they simply break up the ink particles into small enough pieces so that your body can do the removal naturally on its own. This explains why it’s not a single treatment process and why it takes several treatments for optimal tattoo removal.

Not every laser works for tattoo removal. Specifically, a type of laser known as a “q-switched” is best for these treatments. Q-switching is not a specific wavelength of light, but rather a way that light is amplified and made more powerful by the laser. Q-switched lasers utilize different wavelengths of light—which is helpful since different colors of tattoo ink attract different wavelengths.

Laser tattoo removal is a process that is customized for each patient. No two tattoos are exactly alike and neither are two laser tattoo removal programs. Sometimes, what worked for one patient’s tattoo won’t for another, and some tattoos take longer to treat than others and require the use of several different q-switched devices rather than just one.

Most laser tattoo removal can be successfully completed with a series of 5 to 15 treatments spaced 6 to 8 weeks apart. If you have a lot of color in your tattoo, you will likely be on the higher end of this estimate. Dark colors absorb light easily, and are the easiest colors to remove. Dark blue and black respond quickest and red is the next easiest to remove after the dark colors. Other colors including pink, green, light blue, orange and white are more difficult to treat because they don’t absorb light easily. These colors can often take several visits to remove or can require a different type of laser altogether to remove them. 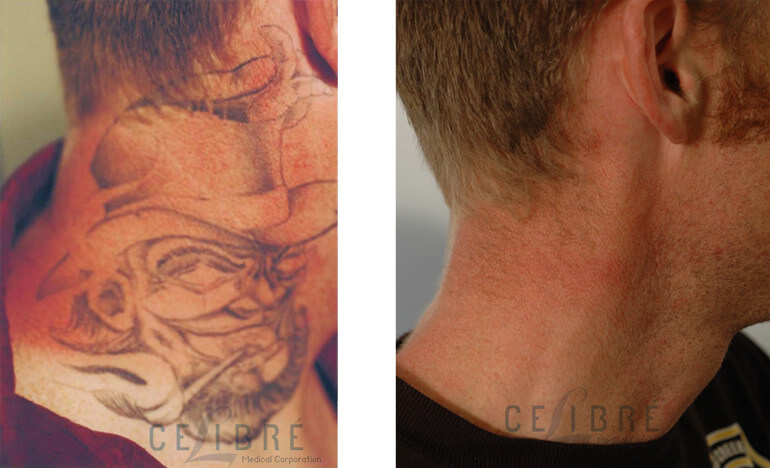 * Tattoo Removal Before and After Photos