Can My Keloid(s) Be Treated with Lasers?

Scarring is a difficult problem to both have as a patient and to treat as a practitioner. If you’re suffering with one or more unwanted scars, we feel for you. Much like any other health condition, yours is unique. The look of your scar(s) is different from everyone else’s; so is your treatment plan and response to treatment. Here at Celibre Medical, we’ve helped many people improve the look of their scars—even dense, thick keloid scars. Lasers, along with other treatment options, can be one very effective tool to get the job done. 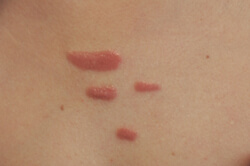 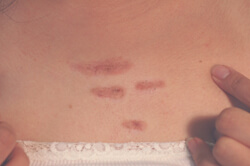 To show you just how effective laser treatment can be for keloids, we wanted to share the story and photos of a patient that we successfully treated. This gentleman came to us after seeing a plastic surgeon for surgical removal of his keloid scar. His keloid originally developed after a severe acne cyst to his cheek about nine years prior to him seeking treatment.

He thought that surgery would be a cure for his keloid (as many people do), but his surgeon (to his credit) was honest and open with him that this is often not the case. Keloids removed surgically often reoccur…and that is exactly what happened in his case. The really unfortunate thing for him was that it reoccurred almost immediately after surgery and grew even bigger than it had been prior.

After discussing all of this with him and examining his keloid, we chose to incorporate the use of Kenalog (steroid injections) our Cynosure V-star (Candela V-Beam) laser into his treatment program. This laser is a pulsed-dye laser, so it targets the blood vessels or vascularity of a scar, which is often significant. If there’s less blood in the tissue, then there will be less growth, and over time, the keloid will shrink. We combined these laser treatments with steroid injections in between laser visits. This is another way that we can decrease or “atrophy” a large-sized scar. In his case, it worked! He was thrilled that we could help him and so were we.

It is important for you to know that while lasers and other treatments can help improve the appearance of scars, they don’t always. Just like the plastic surgeon, we also had a discussion with him up front, before we started treatment, that he may not see any change in the size of his keloid. Again, everyone will respond differently to these treatments. Maybe the biggest difference between laser removal and surgical removal of keloids is that with the laser, there is virtually zero chance that it will increase in size after treatment. This fact is critical to consider if you are weighing out the risks and benefits of laser or surgery for your keloid scar.