We’re sure you’ve heard the expression “the eyes are the window to one’s soul.” At Celibre Medical, we have many patients tell us their eyes are making their soul look a lot older than it feels! We agree! Lines and wrinkling above, between and around the eyes, coupled with the natural downward gravitation of the eyebrows creates an unhappy, heavy and tired appearance our eyes as we age. But there is an answer: Botox and Dysport.

Using Botox (Dysport) in these areas is extremely common; in fact, we’d say these areas are probably the top three on the face where Botox is used. Here’s how Botox (& Dysport) can help each:

Between the Eyes (Glabella)

The medical term for the area between the eyes is the glabella. Beneath the skin in this area are three muscles: two, rectangular-shaped ones that pull the middle part of the brow towards the inner part (one on each side) and a shell-shaped one right in the middle that pulls the inner part of the brow down towards the nose. Known together as the “glabellar complex”, these muscles all contract simultaneously to produce a frown. Go ahead, make your “I don’t approve” face. See the lines that form between your eyebrows? As we get older, these lines tend to stay around…even when we’re not frowning! Another common term for them is “the elevens” since they look like the number itself, permanently etched between your brows. Whatever you call them, these lines make us look angry, sour and older than we feel.

Botox can be selectively injected into these three muscles relaxing them, preventing the proverbial “permanent scowl” from dominating our look. Another benefit? Since these muscles are brow “depressors”, meaning they pull downward on the brows, when relaxed, the brow elevator muscle works unopposed (think tug-of-war). The result is a brow lift without the surgery! The standard dose for the glabella is around 20 units.

Above the Eyes (Forehead)

Remember the brow “elevator” muscle we talked about above? That muscle is called frontalis and it is a large, sheet-like muscle that spans the length and width of the forehead. Frontalis is a tricky muscle because no two are exactly alike! Some are slightly V-shaped, while others are more rectangular. Some are narrow and others are wide. Why does all this matter? Because it can affect how your forehead lines look when you raise up your brows. It takes an experienced and skillful injector to understand the right dose of Botox for this muscle. Too much can mean your eyebrows drop (think Cro-Magnon brow). Too little or not enough to treat the whole muscle can mean uneven brows or “Dr. Spock” brows which just looks bad. The right dose (combined with proper treatment of the glabella) should leave your forehead smooth and your brows even and lifted, all at the same time.

For these reasons, there is no one, standard dose of Botox in this muscle. It may range from 10 to 20 units depending on your gender, the size and shape of your frontalis muscle and how strongly it contracts (single horizontal line or several).

This last area is one that is different for everyone as well. Some people have pronounced lines that radiate outward from the edge of the eye when they squint or smile, while others may have hardly nothing at all. The reason Crow’s feet happen is from the contraction of a purse string-like muscle around the eye known as the orbicularis oculi. Treating orbicularis with Botox relaxes it, dramatically smoothing the skin around the eye both at rest and when smiling and squinting. The orbicularis oculi also pull down on the outer edge of the eyebrow so, if you remember about that downward/upward tug-of-war we talked about with the glabella, treating the crow’s feet can also lift the outer edge of the brow and eyelid which helps to open up the eye. Again, there is no one, single dose that works for everyone, but generally 10 to 15 units is standard.

Don’t think Botox can’t be used anywhere in the lower face as there are a few places where it can be helpful. But, far and away, using Botox in the glabella, forehead and outer eye is its bread and butter. When done right, Botox can lift and shape your brows, open up your eyes and give you a younger, more relaxed and refreshed appearance. 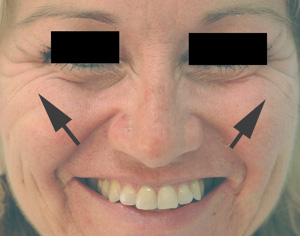 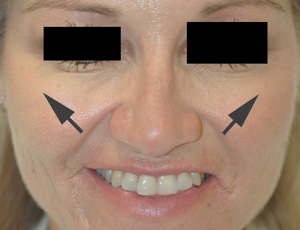 * Botox Before and After Pictures